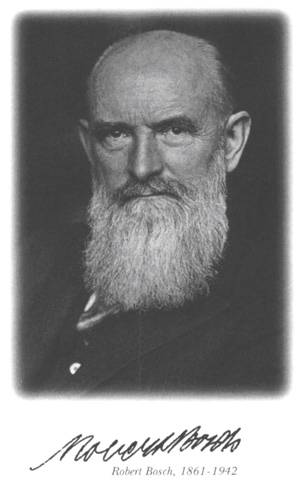 The name of Robert Bosch is closely associated with the automobile.  But today, Bosch is a worldwide company with 180 facilities including 140 factories in 128 countries.  Bosch is also a partner in 42 joint ventures with interests in a wide range of products including communication, thermo technology, automation technology (robots), and household equipment.

Robert Bosch, German industrialist, was born on September 23, 1861 in Albeck, Germany.  In 1884 Robert Bosch sailed to America to work with Edison and Bergmann.  In 1886 when he was 25 years old, Bosch opened his “Workshop for Precision Mechanics and Electrical Engineering” in Stuttgart.   In 1906 Bosch established the first U.S. subsidiary and established sales offices in Chicago and San Francisco in 1908.  In 1909 Bosch built a factory in Springfield, MA to produce magnetos.  In 1920 A Bosch plant with 107,600 sq. ft. was opened in Springfield, MA.  Robert Bosch died in 1942.  Following his death in 1953 the Robert Bosch Corporation was formed and in 1966 headquarters was moved to Chicago.

From the very beginning, Robert Bosch was greatly concerned with promoting occupational opportunities and furthering workplace training.  Prompted by his keen awareness of the entrepreneur’s social responsibility, he was one of the first industrialists in Germany to introduce the eight-hour work day.  It was followed by exemplary social benefits for his associates.  He did not want to make any money on the armament contracts forced upon his company in the First World War.  Instead, he donated several million German marks to charitable causes.  A hospital that he gave to the city of Stuttgart was officially opened in 1940.

Robert Bosch had a house built in 1909 in Stuttgart.  Today it is the headquarters of the Robert Bosch Foundation, which was founded in 1964, and since then has been one of the largest industrial foundations in Germany.  The foundation’s basic mission is to “relieve human need and to improve the bodily health and the moral and spiritual standing of the people.”  This assignment as defined by the founder still applies and provides for a wide range of activities in the interests of charity.  The Foundation is the embodiment of the endeavors in the field of public benefit of Robert Bosch the company’s founder.  92% of the capital stock of Robert Bosch GmbH is owned by the foundation, and the funds it receives on a pro rata basis from the company’s profits are donated directly without exception to charitable causes.  By the end of 1995, total disbursements had reached around 640 million DM.

“Work as long as you can, but as economically as possible” – Robert Bosch